Christmas is my favourite time of year – I’m an absolute sucker for everything that goes along with it.  A musical snob most of the year round, at Christmas I tune into a cheesy station that plays carols and novelty Christmas pop non-stop, and listen pathologically.  I believe that the true smell of fellowship and good-cheer is the aroma of mince pies baking in the oven.  I can’t get enough of it.  In the complex world of childcare, however, yuletide brings complications and difficulties.  One of those problems wears a red suit and pilots a sleigh drawn by magic reindeer.

The profound philosophical issue Santa poses for some childcare workers is the inherent deception central to his existence.  The bitter truth is that there is no merry old elf flying at super-human (or should that be super-reindeer) speed across our skies delivering presents on Christmas Eve.  Many of our children get precious little in their stockings, and I am always hyper-aware of that truth when discussing the Father Christmas myth.  The expectation Santa fosters can be undeniably cruel.  Yet there is also something irresistibly beautiful about this image.  He is the universal personification of goodwill and charity.  Some bemoan the loss of spirituality from the Christmas season – I find myself welcoming it.  Not the ludicrous, orgiastic spending, but the democracy it creates: Santa should be non-denominational.  Too many children of all races and creeds need him.  If that has somehow sped Christmas towards the consumerist hell it has become, then so be it.

The biggest issue I have with Kris Kringle, however, is my oath never to lie to children.  About anything.  This came to a head at Little Scamps, a creche for children with special needs, one Christmas as December wound towards its inevitable conclusion.  Susan, a colleague, pulled me aside as I was laying out the breakfast things one morning, looking anxious.

“I got a call from Jeffrey’s mother last night,” she told me.  “Apparently Mitzi told him there was no Santa when during the bus ride home.  He was very upset, but she’s managed to talk him down.  We’re going to have to have a word with Mitzi.  If the news gets out, we’ll have a riot on our hands.”

“In this instance, I blame her parents,” Susan said.  “Fucking hippies are so right on, they don’t even want to observe Christmas.  When I called them about it, they informed me that, as far as they’re concerned, the season of goodwill is all a capitalist scam, designed to anaesthetise the masses.”

“They’re entitled to their opinion,” I said.  “They might even be right.”

“You can’t go around wrecking every other kid’s childhood because of some wacky left-wing nonsense you’ve gotten enamoured with,” Susan snapped and went to get the cereal bowls.

The conversation began almost as soon as we were sat down for breakfast.  Jeffrey was in high dudgeon, obviously feeling very badly treated.  Mitzi was uncharacteristically in a foul mood too.  She usually hid her darker emotions under a sickly sweet blanket of simpers and smiles.  Not today.

“Me talk,” Jeffrey said, raising his spoon as soon as we were settled.

“I did nothing,” she said, looking quite hurt herself.  “You say such bad things, Jeffrey the mongoloid.  Bad, bad words.”

“That’s a bad word, Mitzi,” Tush said.  “We do not use words like that at Little Scamps.”

This last statement caused furore.  All the children started speaking together at once.  I had to bang my spoon against my juice glass to get some order, and even then Gus continued to shout his annoyance at Mitzi.

“Gus, you have to wait your turn,” I said.  “Jeff is speaking now, and Mitzi deserves the chance to tell her side too.”

Mitzi was playing with her breakfast.  She had lost a lot of weight in the past few months, and, though still dangerously overweight, was nowhere near the size she had been when I first met her.  Her overall conduct had improved considerably, too, the casual sadism more or less disappearing.  It was as if her instinctive musical flair had given her an identity – she didn’t need food to lift her spirits anymore.

“Mitzi, did you tell Jeffrey that?” I asked.

“My Mam and Dad say that,” Mitzi said.  “They say: ‘Mitzi, we don’t go for that crap.’  No Father Christmas.  No presents.  Christmas day same as any other.”

“And it is quite alright for your Mum and Dad to believe that if they want to,” I said.  “But Jeffrey’s parents believe something different, and it is also fine for them to celebrate Christmas and enjoy it in their way.”

“There is really a Santa, isn’t there Shane?” Gus asked, looking at me with such worry and apprehension that I was frozen to the spot.

Here was the question, the one I had been dreading.  To lie or not to lie.

“Well, isn’t it nice to think so?” I said carefully, hating myself for using such cheap news-speak.

“My older brudder tolded me there wasn’t no Santy, and my Mam shouted at him good,” Gus said sadly, picking up his toast.  “But I wondered about it since then.  What if there isn’t?”

“What do you want to believe?” Susan asked him.  “In your heart, what do you think is the truth?”

“I think it’s true,” Ross said.  “I even think I heard him once, the sound of them bells.  I was half asleep, ’cause I tried to stay awake to get a look at ‘im.  Think I nearly did, too.”

“I went to see him in the toyshop,” Milandra said.  “He smelled of cigarettes.  I don’ tink it was the real Santa.”

“You know how we decorated the tree?” I asked.

“And you know how we have been singing carols and Christmas songs? And they make us feel so good and happy?  Even Mitzi?”

“And how we’ve read lots of Christmas stories and poems?”

All eyes were on me.

“For me, Christmas is about those feelings.  It’s a time when people are all just a little bit nicer to one another.  It’s a time when we all want to be with our families and the people we love, and when we try to think of how we can make those people really happy.  And Santa is the person who we think of when we feel that way.”

“Yes, it is the time we celebrate Jesus’s birthday,” I said.  “And any of us who are Christian should be thinking about that, too.  But I reckon most people, for right or wrong, think of Santa first.”

“Now, if so many people can act better, and if this time of year makes us do good things, and feel warm inside, then I’m happy to believe in Santa, and in magic,” I said.

“So you believe in him then?” Gus asked hopefully.

And it wasn’t a lie. 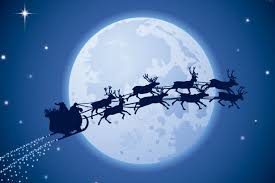 Childcare Expert; Bestselling Author; Teacher; Musician; Nerd; Husband; Dad; Grandad. I like tee-shirts, folk music, dogs, wildlife, comic books and movies. Find my musings on life & all of the above here! View all posts by dunphyshane